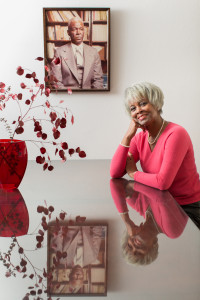 Ms. Anna Jones, Producer/daughter/narrator sets out to explore her father’s improbable rise from sharecropper to education leader. To her surprise, she discovers that he led a long and arduous movement for equal education in Northampton County during the Jim Crow Era, brought a fractured community together, and helped transform the educational landscape for all of the County’s children.

Mr. Grover Edwards, Member, Northampton County Board of Education in the 1970s.

Dr. Willie Gilchrist, Teacher and administrator in the Northampton County Schools, 1970s to 1990s, and a deacon at Roanoke Chapel Baptist Church.

Mr. Marshall Grant, (d. 2019) Retired farmer, politician, and community leader whose political philosophy was opposite that of James Jones in the 1960s and 1970s.

Mrs. Lucille Hardy, (d. 2021) Friend, relative, and peer who grew up with Jones. She is the oldest living member of his church and pianist for over 70 years.

Mr. Wayne Jones, Son. In 1965, he was one of the first Black students to integrate all-white Gaston High School, a hotbed of resistance. His story reveals the emotional impact he felt as the son of the leader for integration in Northampton County.

Judge Perry Martin, (d. 2020) Former attorney, politician, judge, and power broker who worked on both sides of the school integration issue during the 1960s and 1970s.